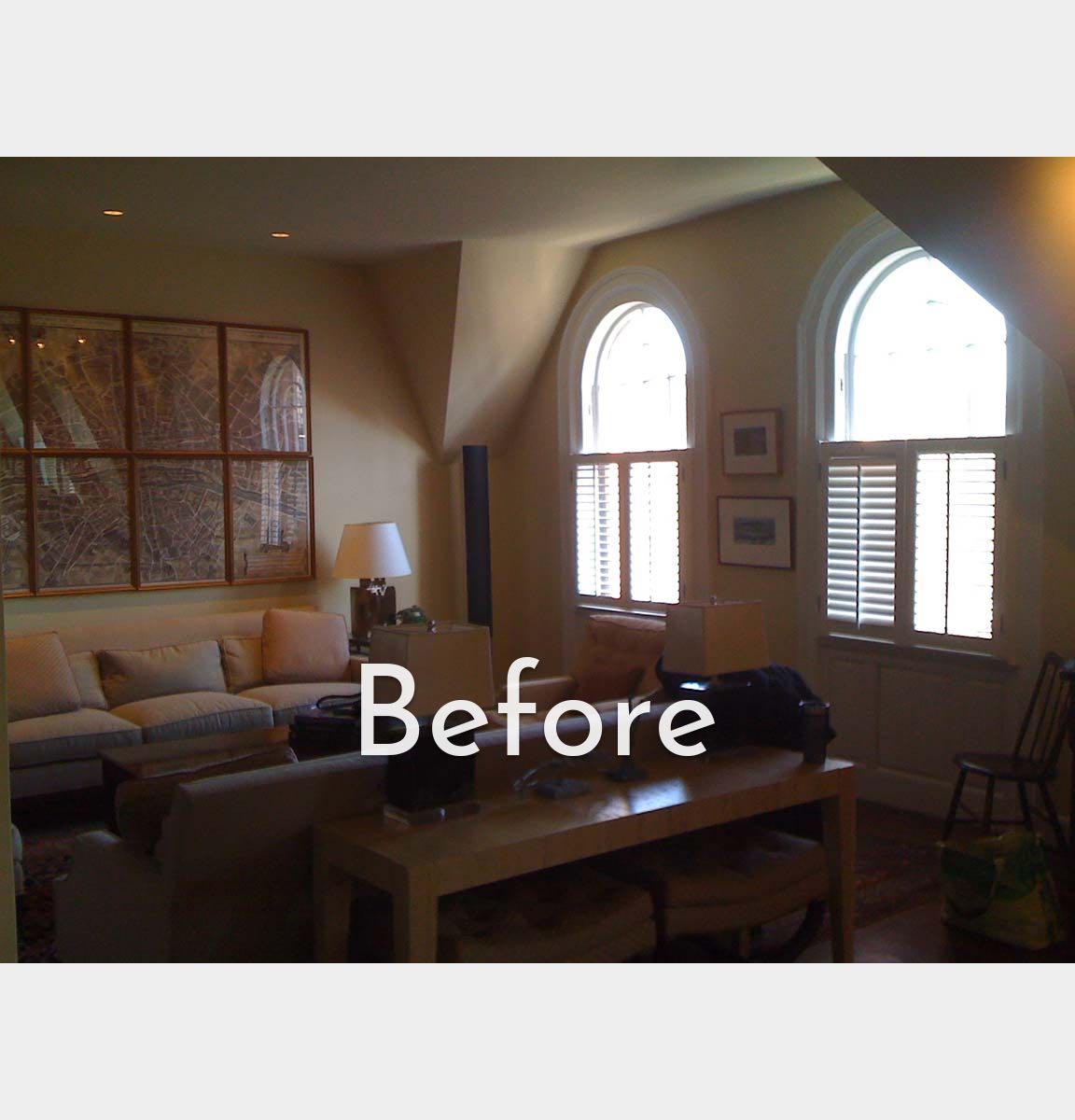 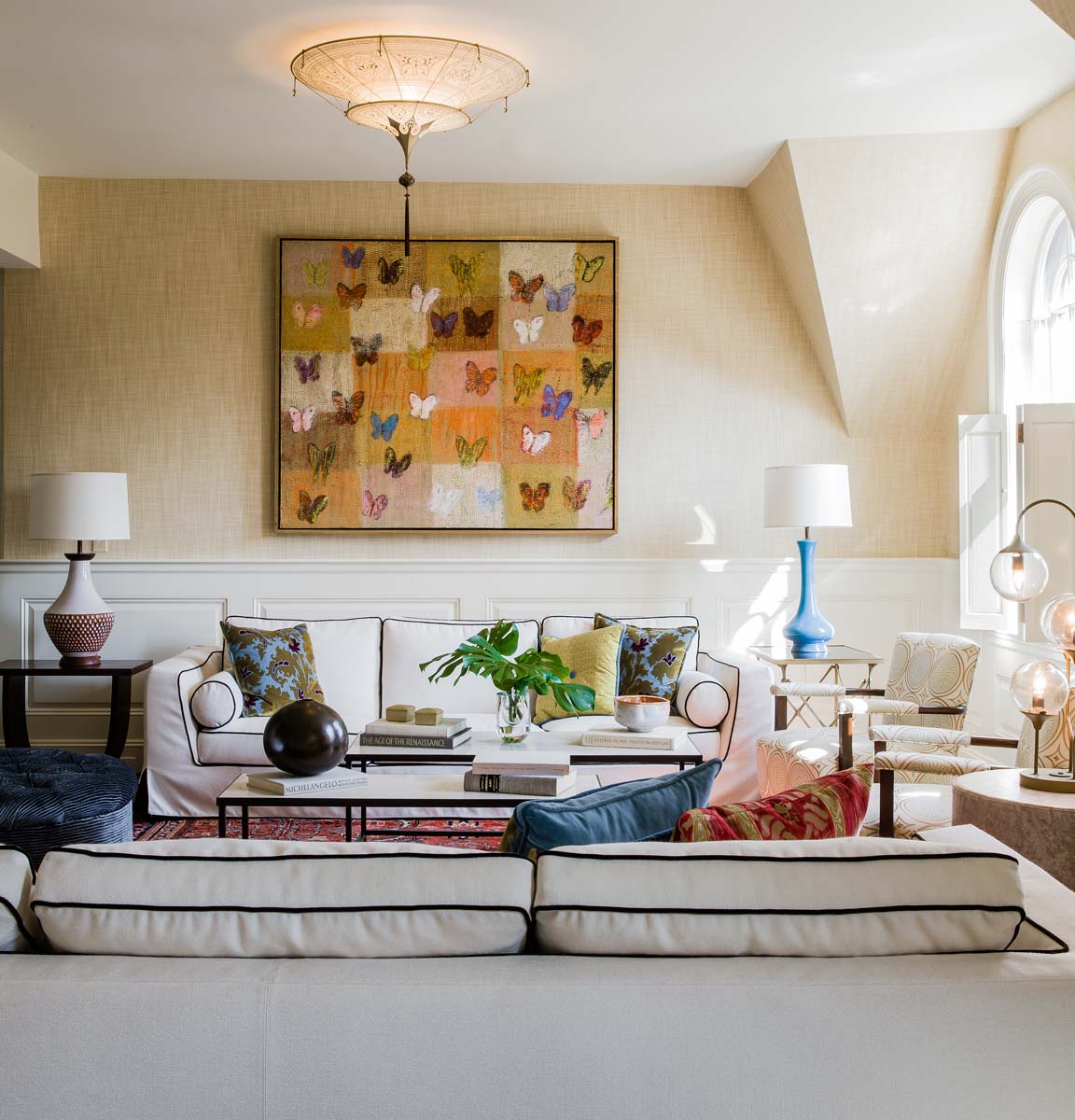 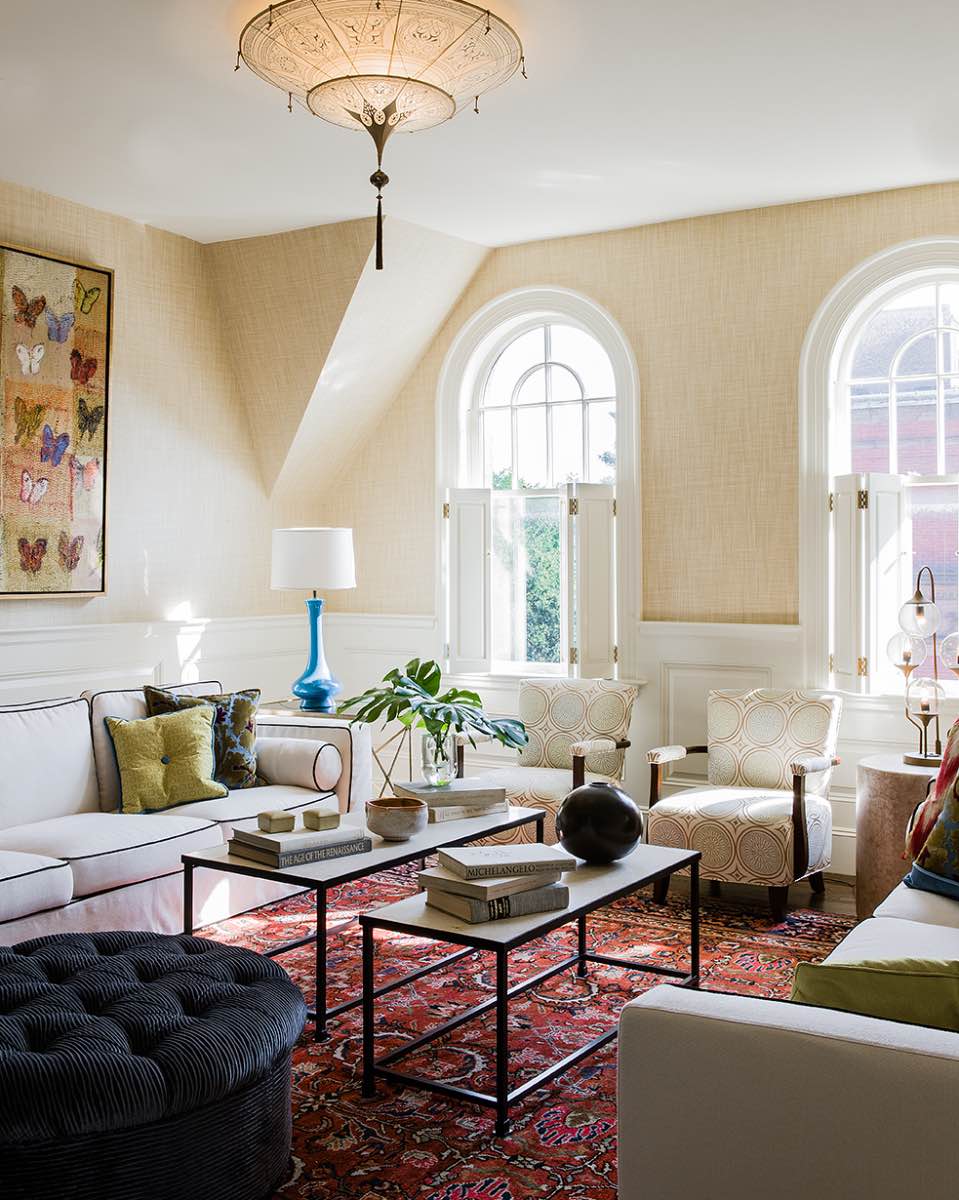 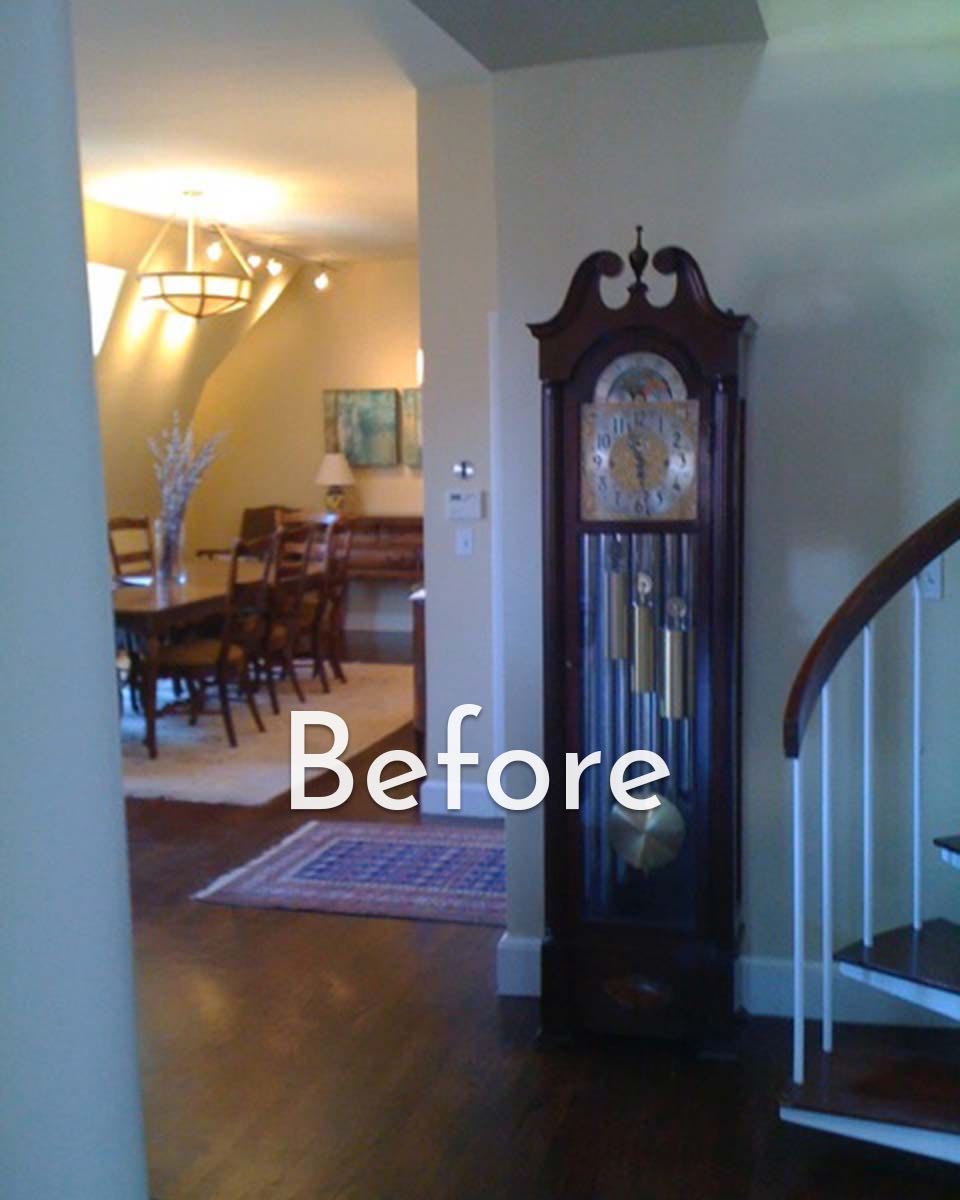 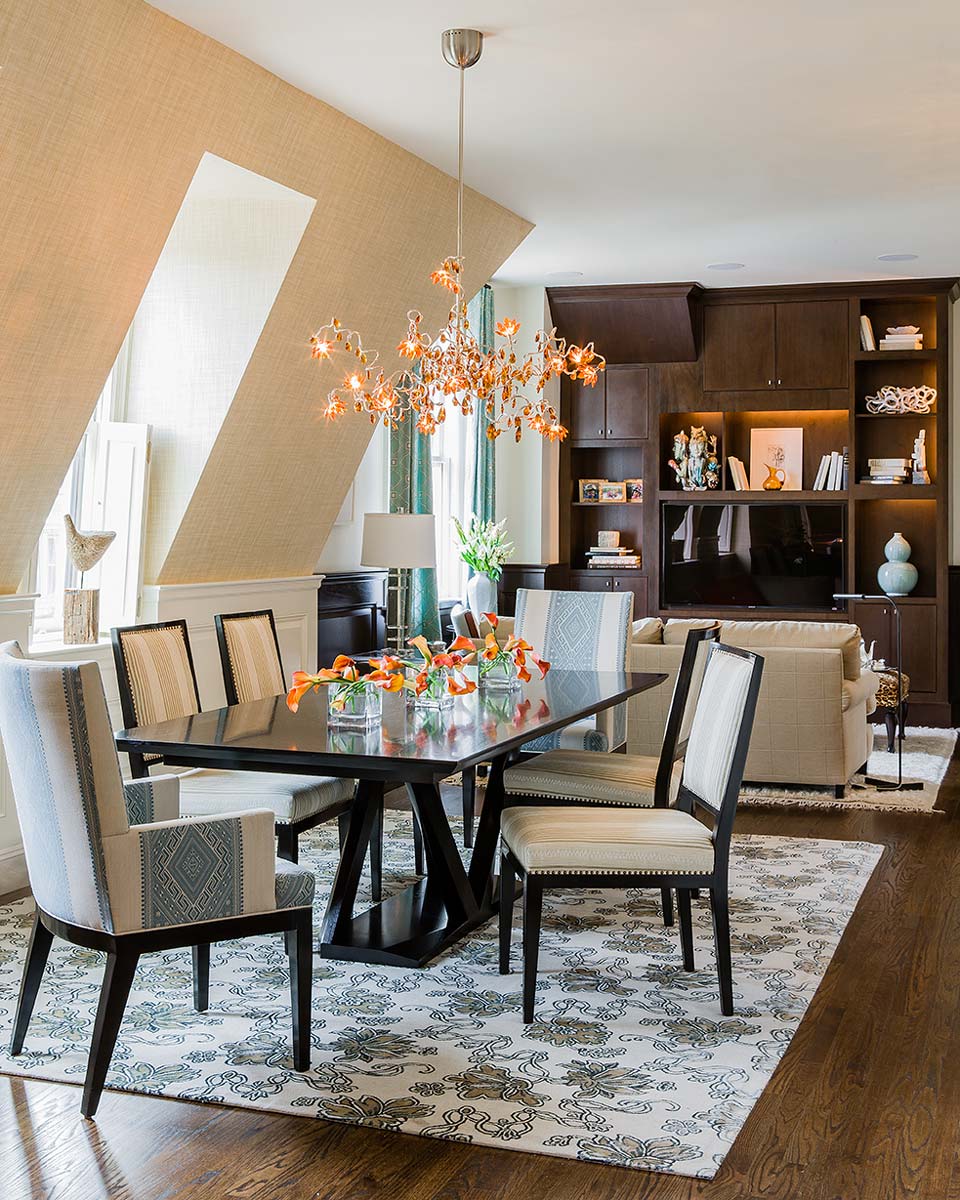 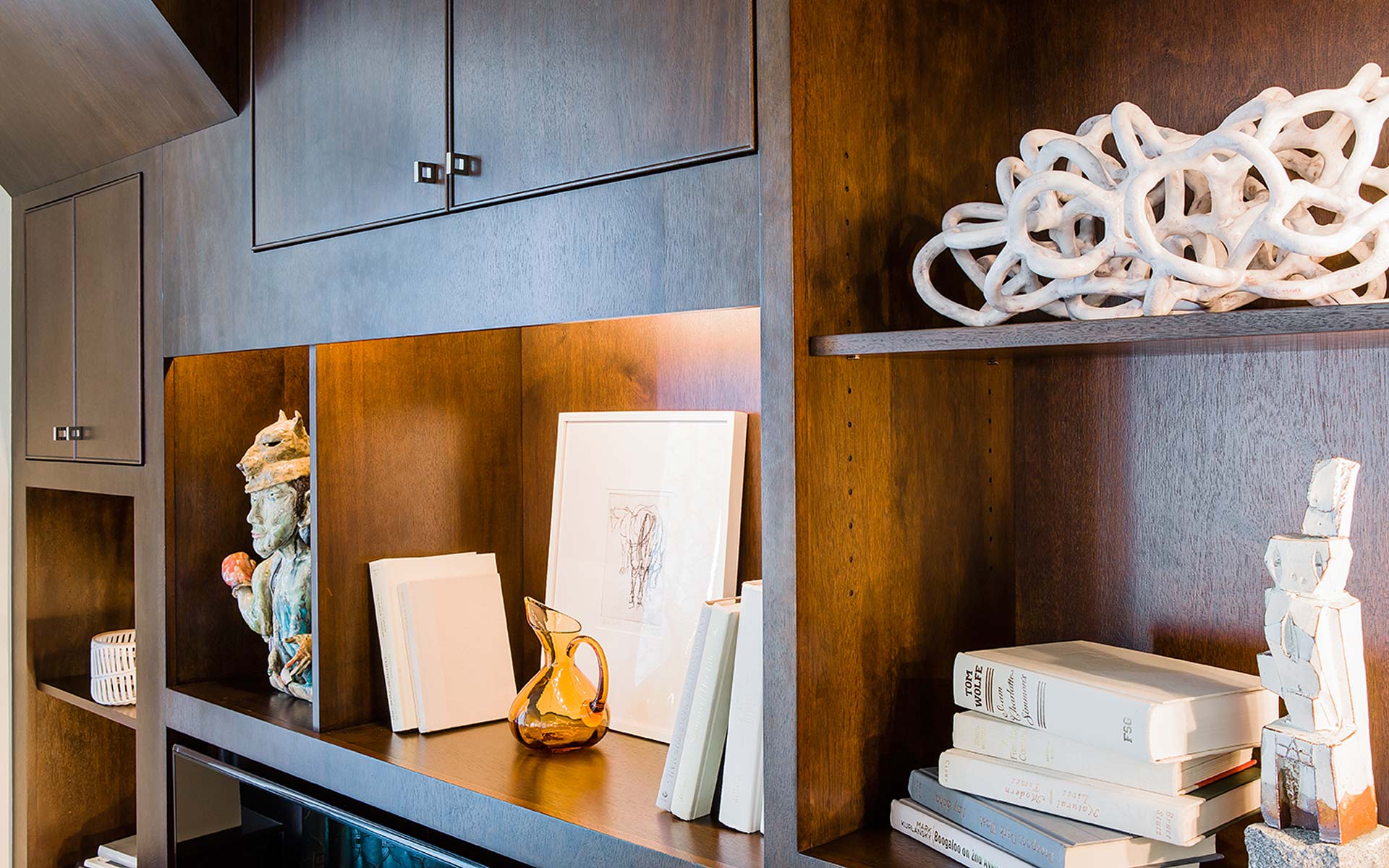 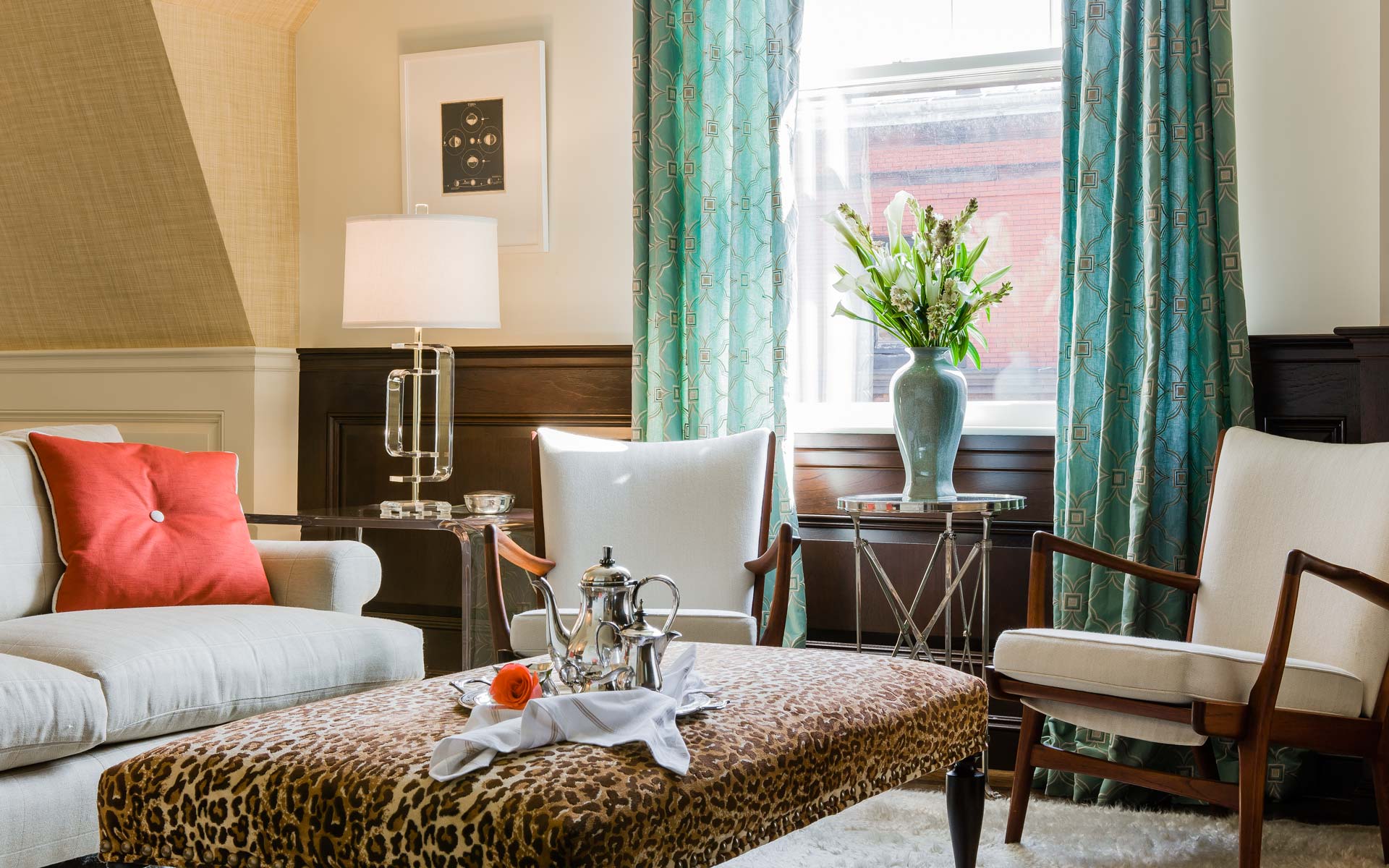 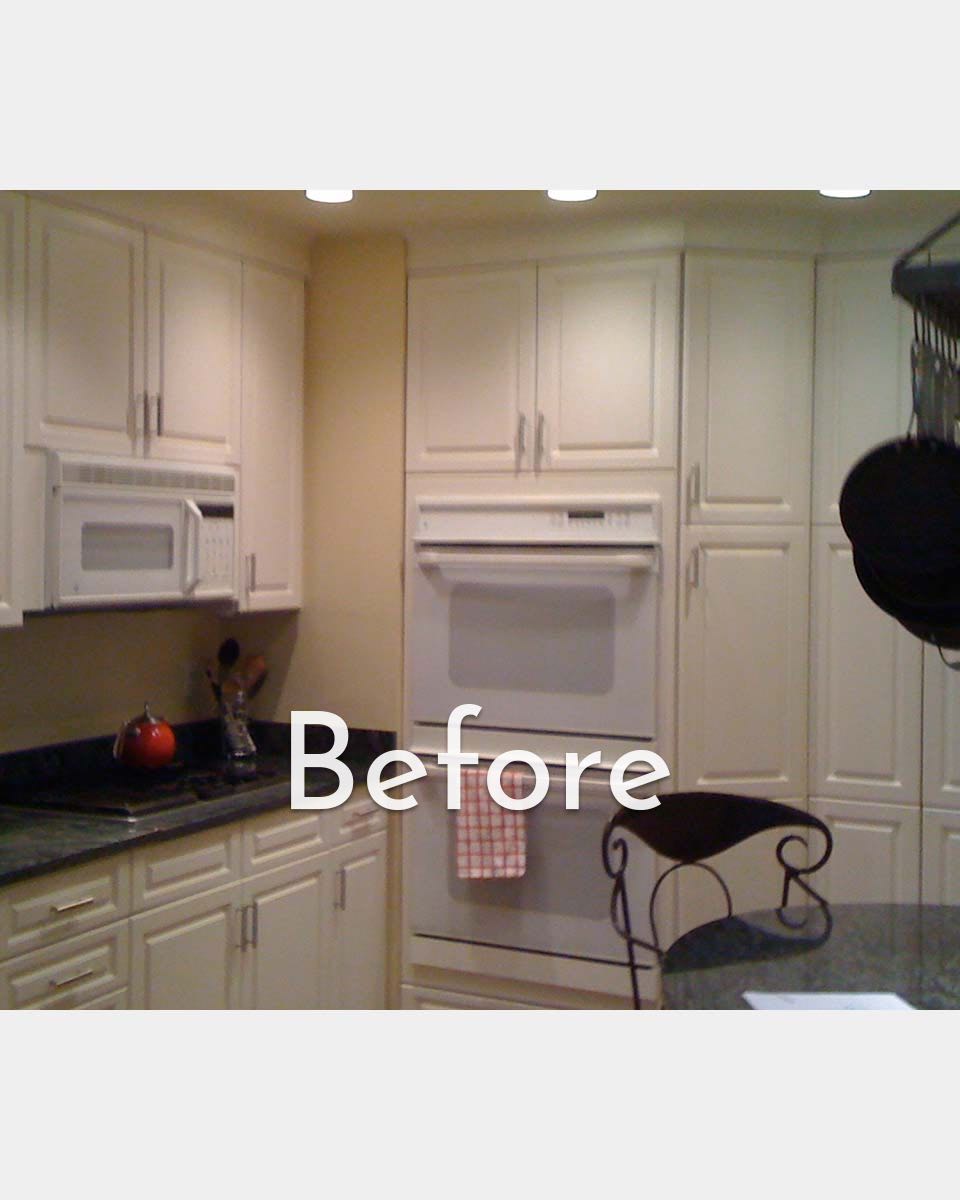 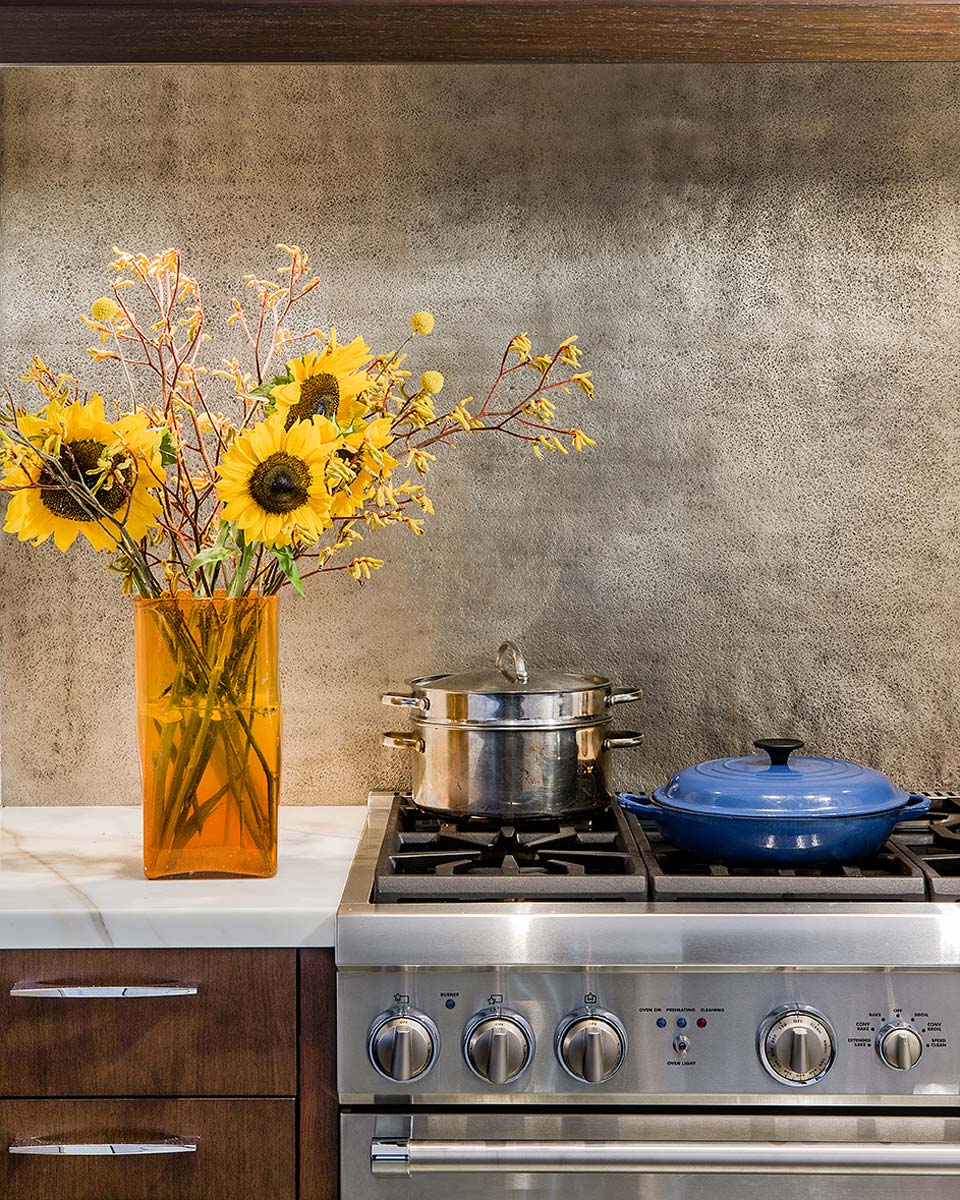 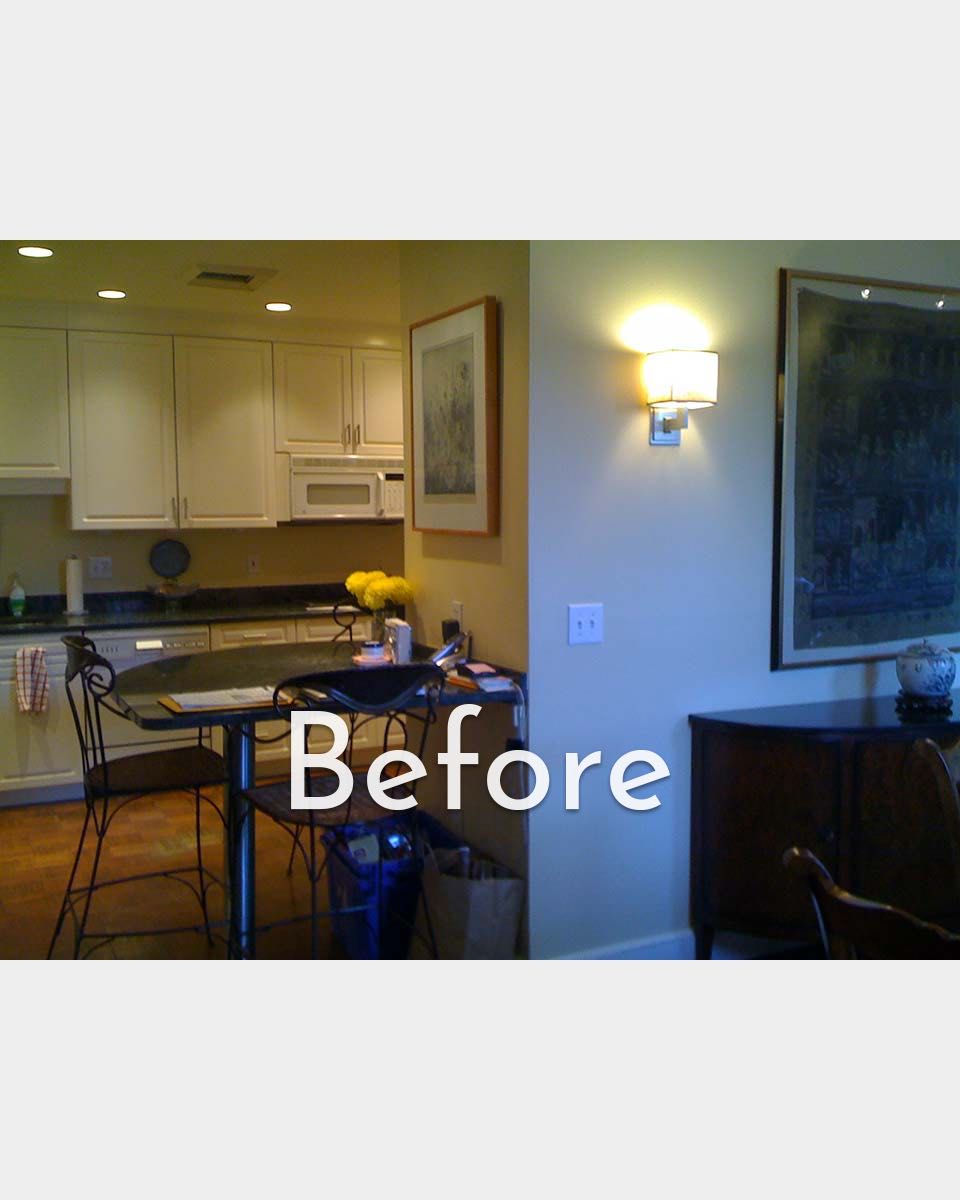 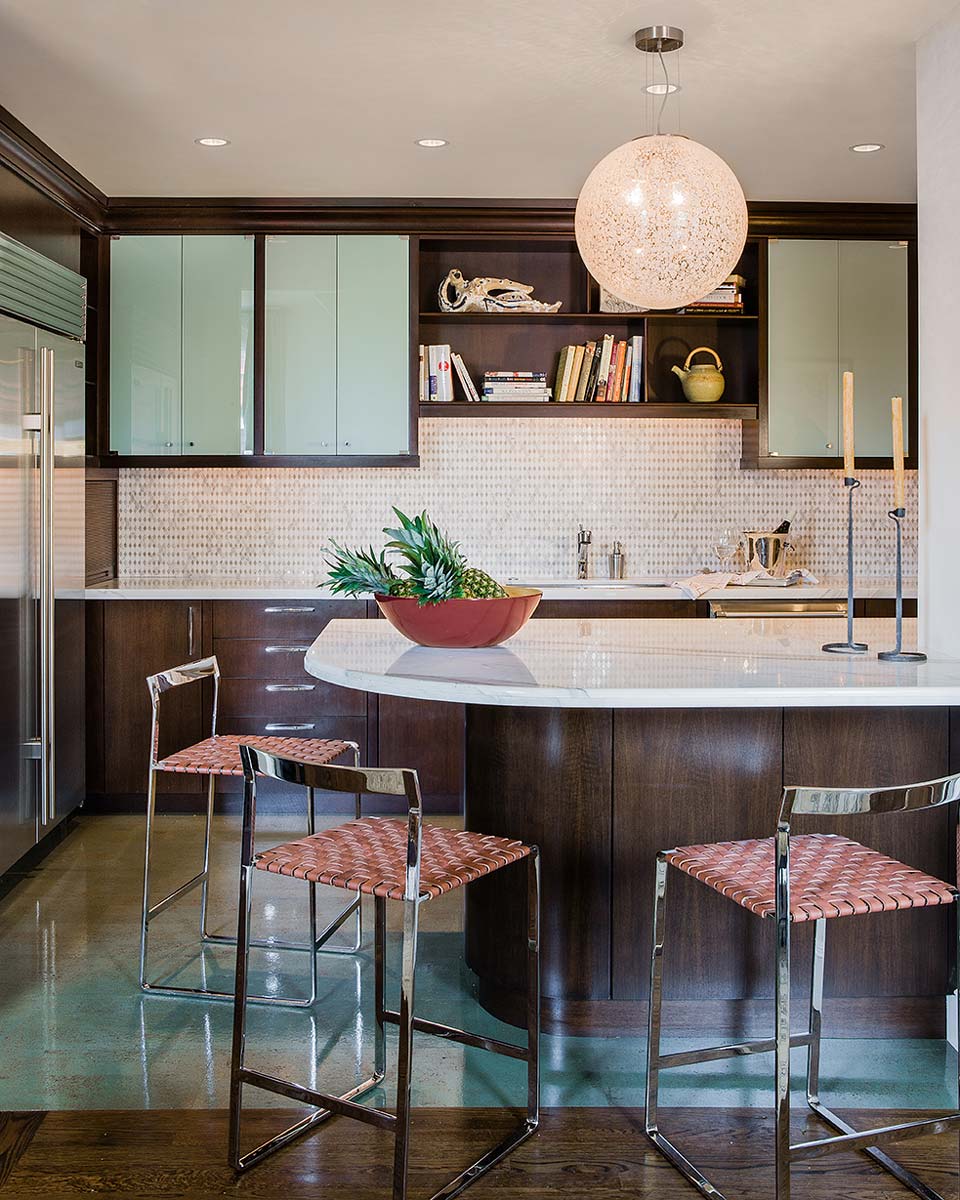 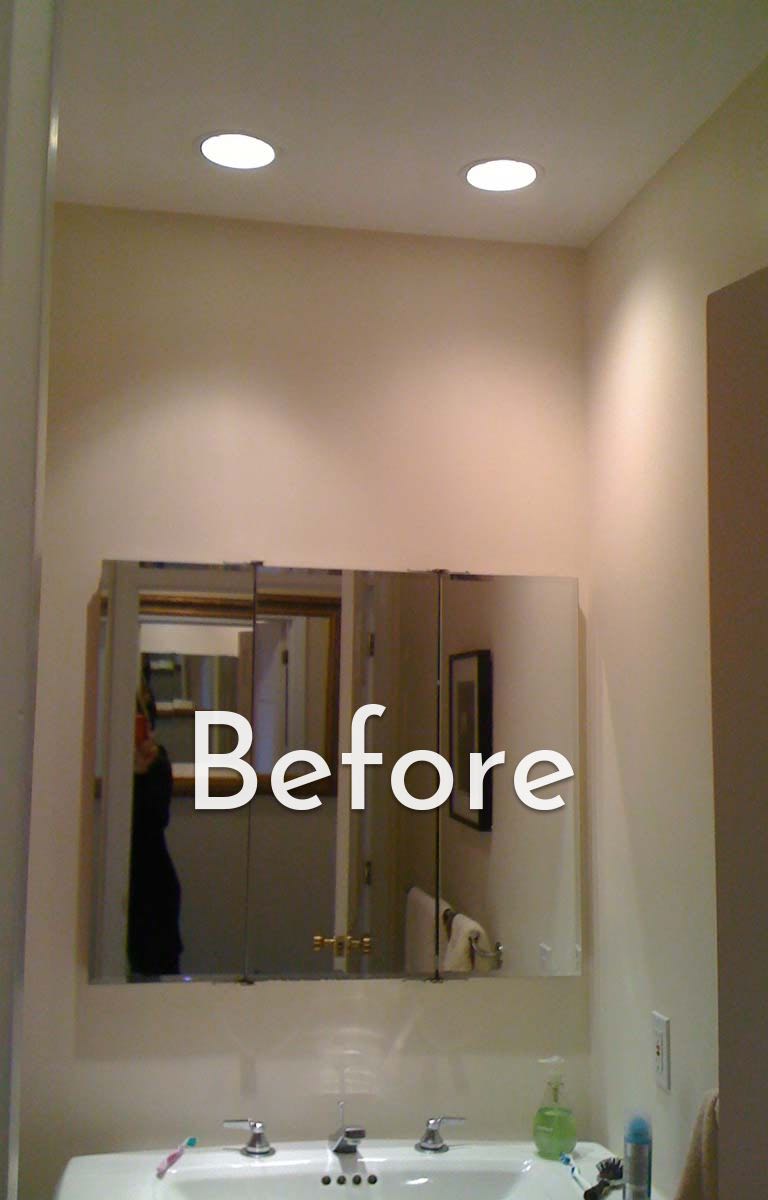 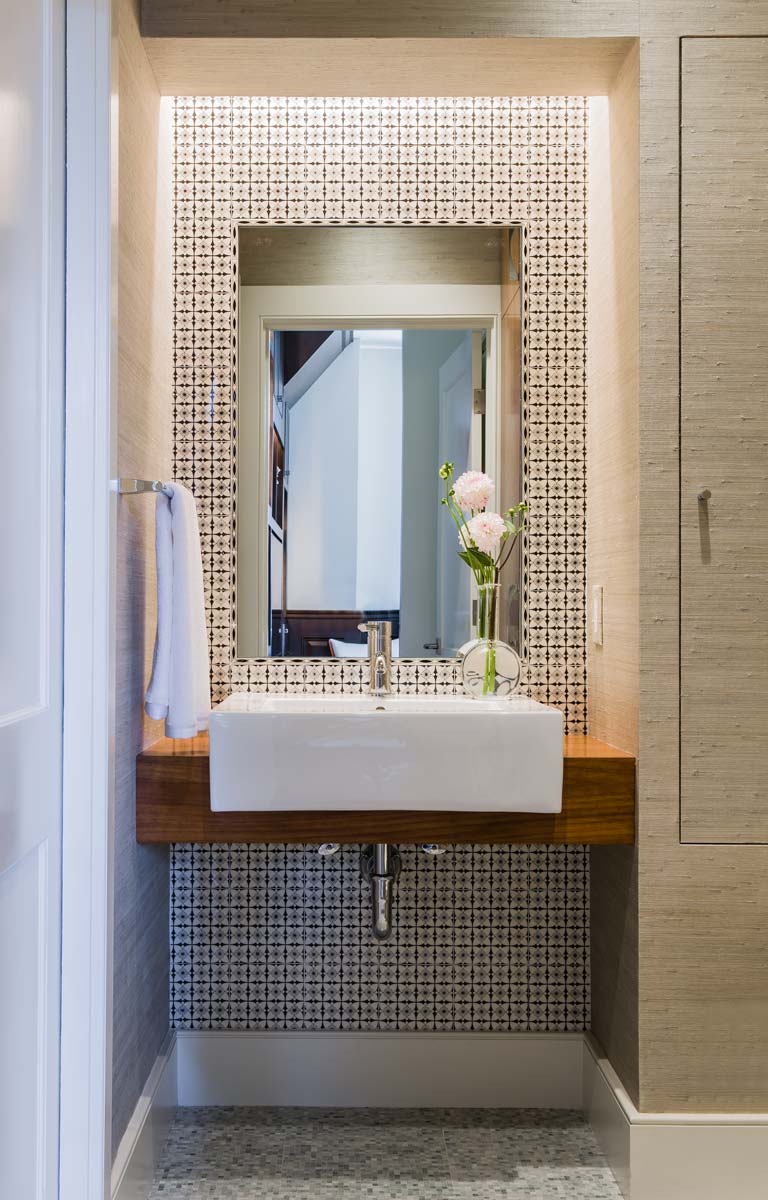 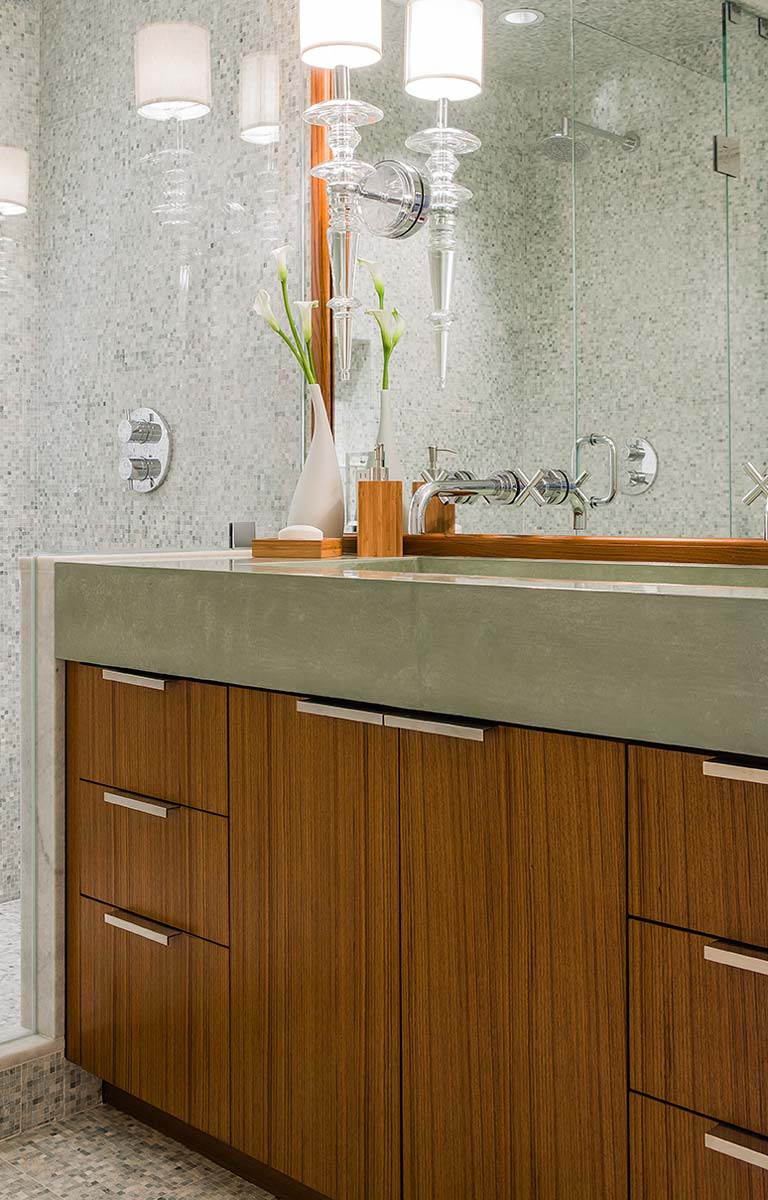 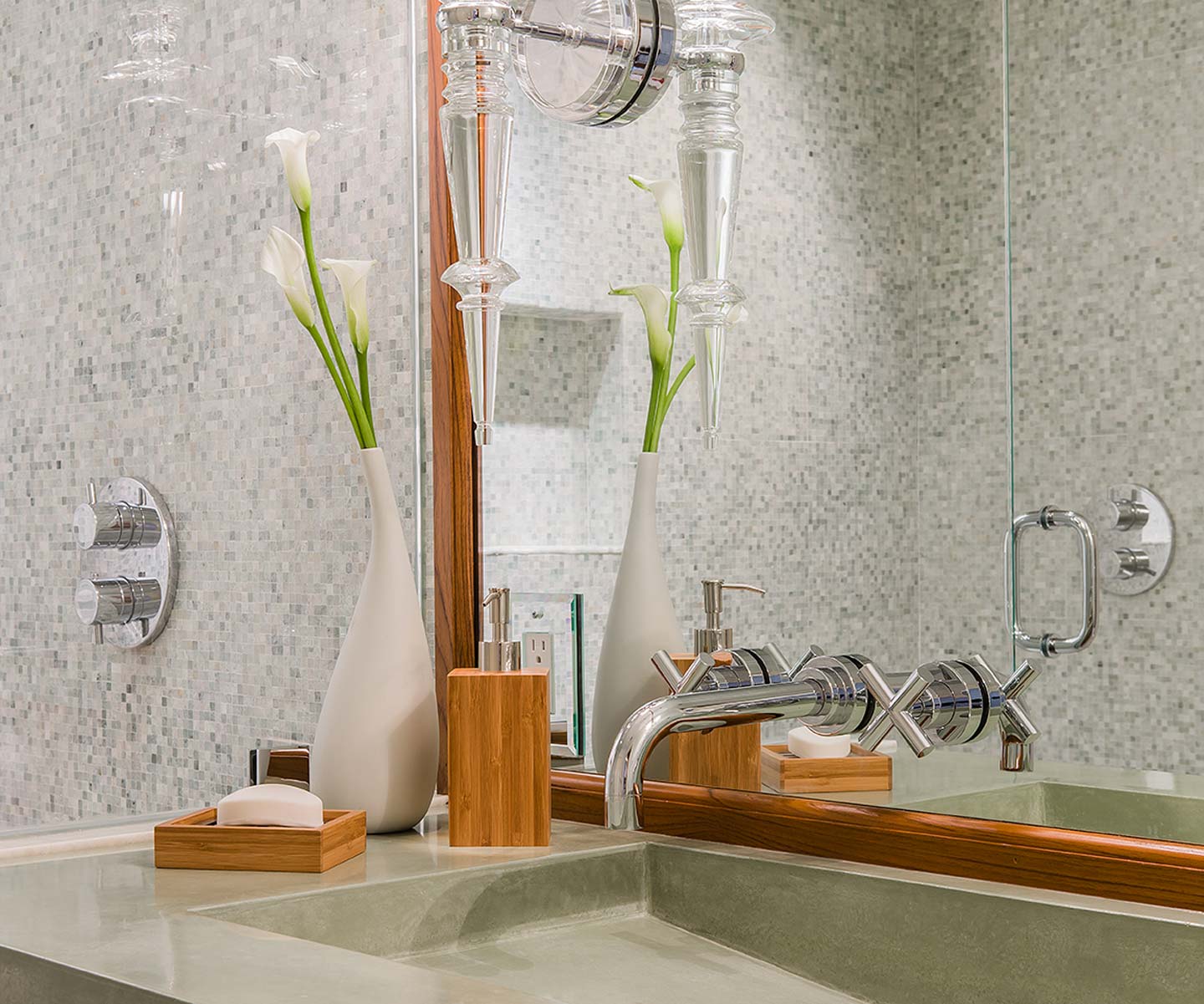 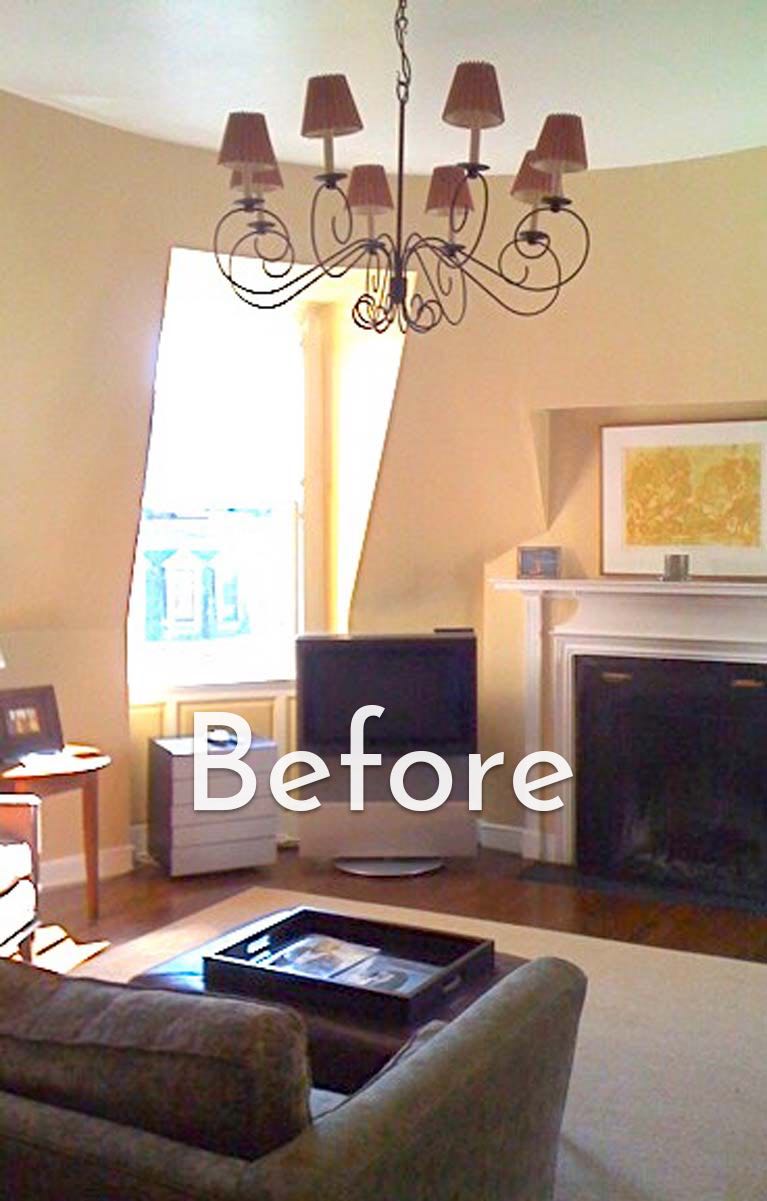 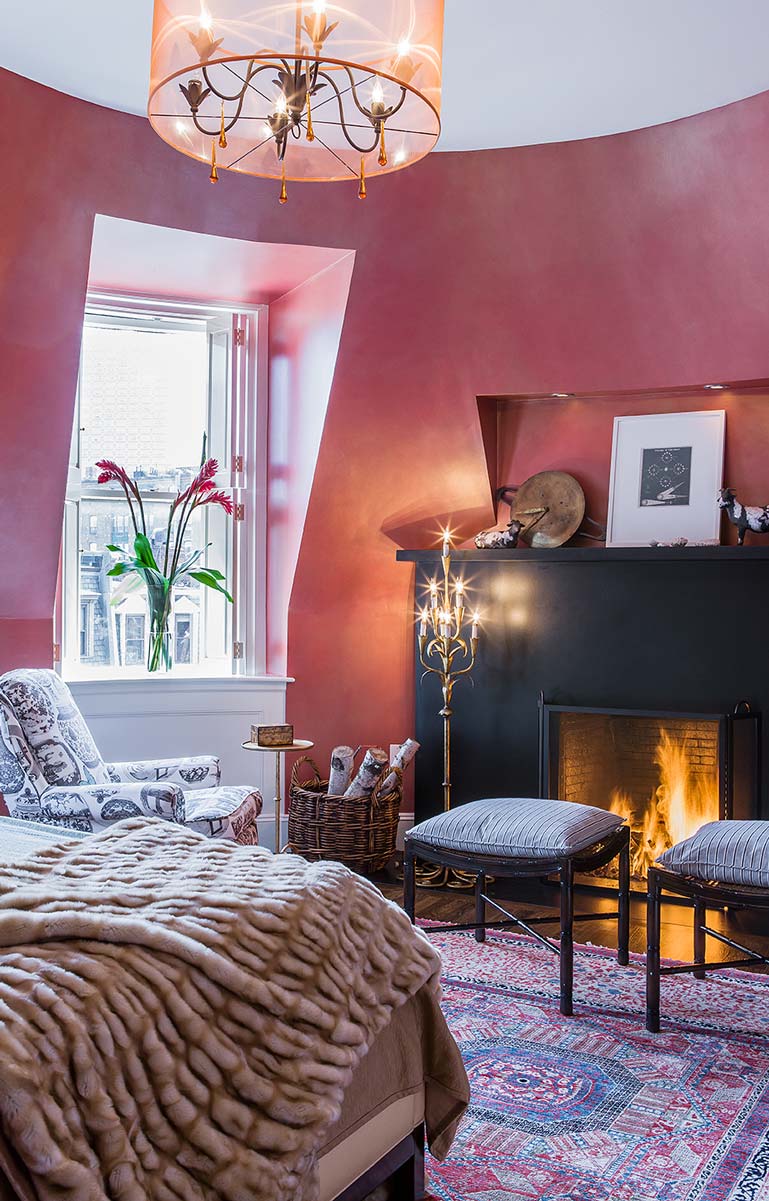 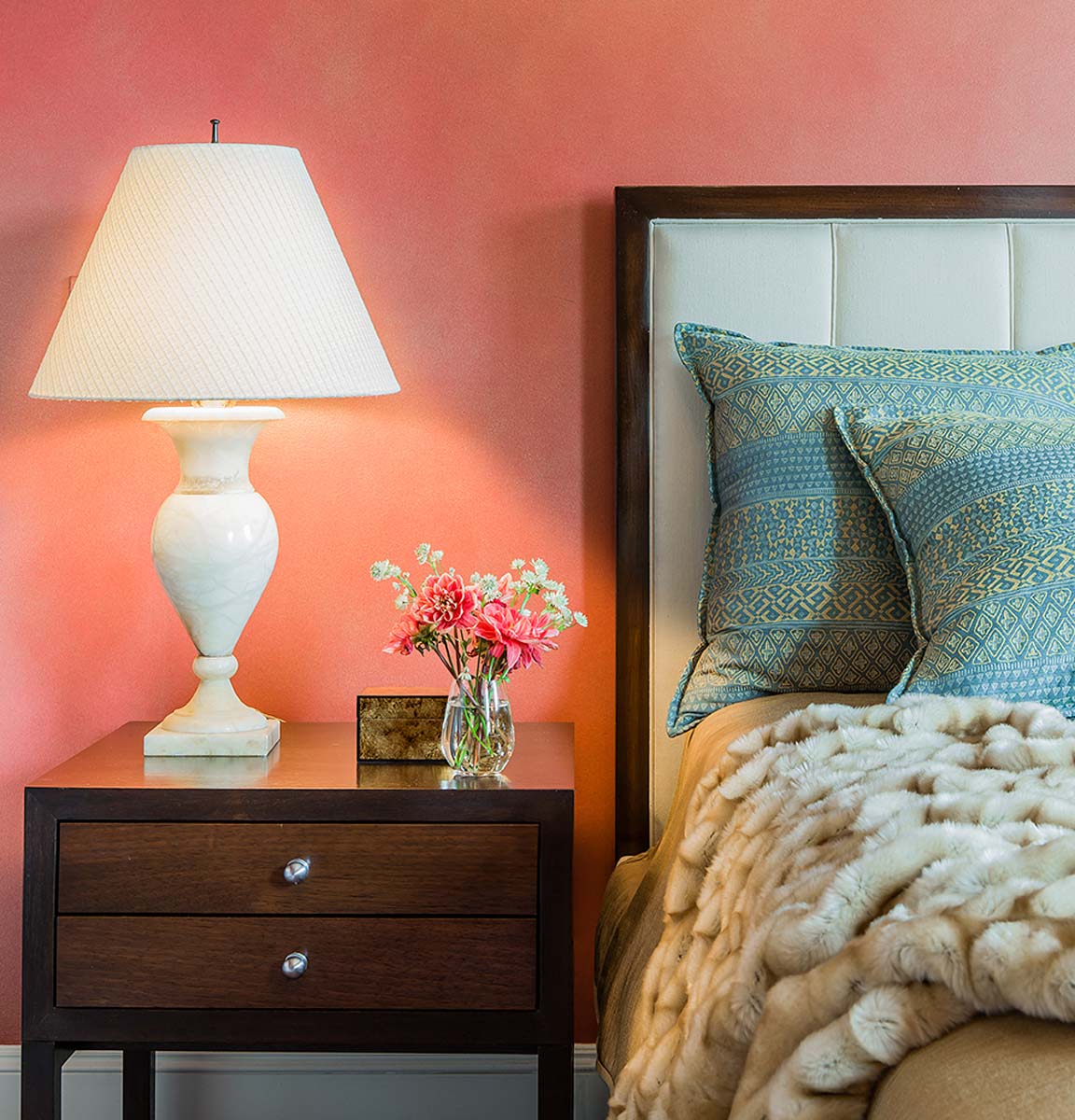 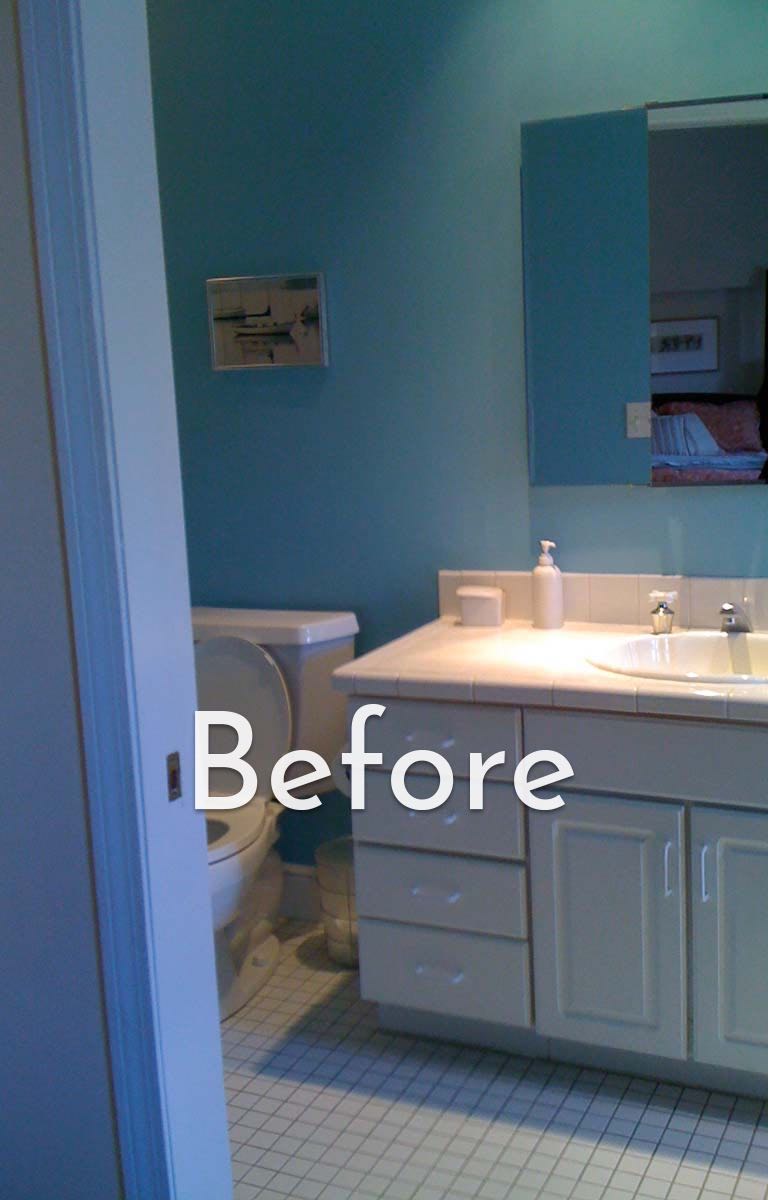 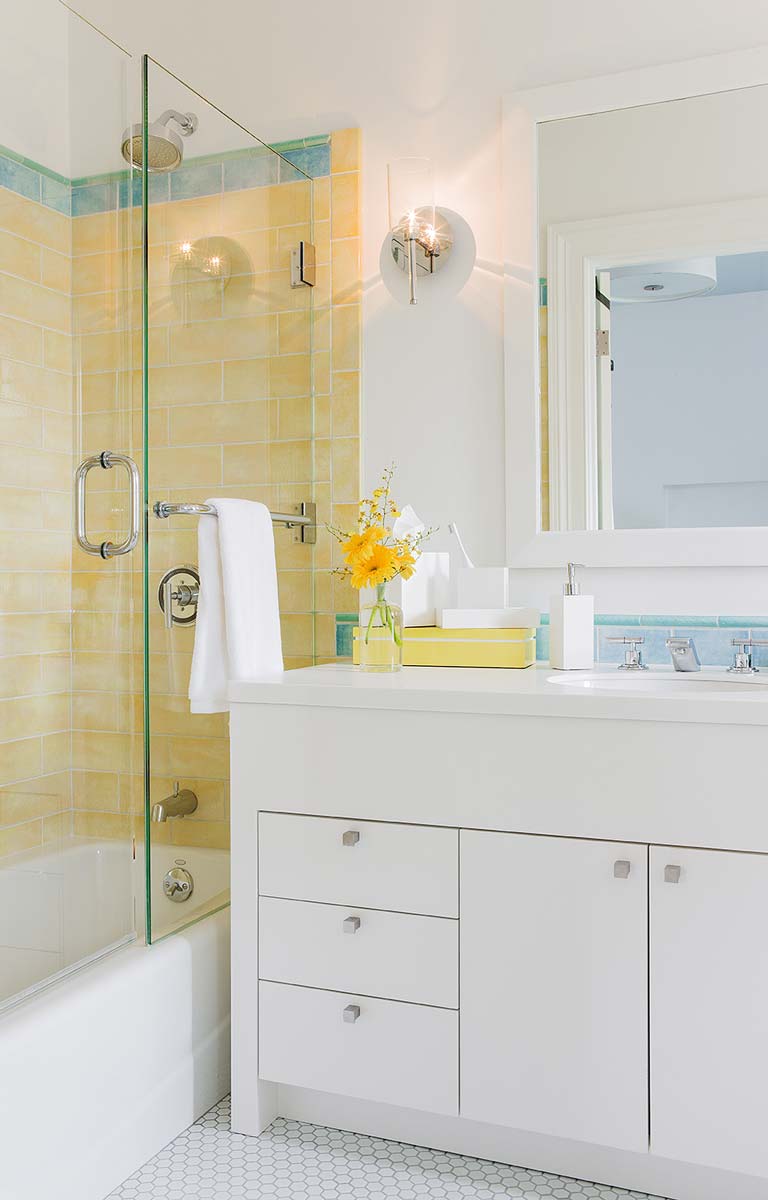 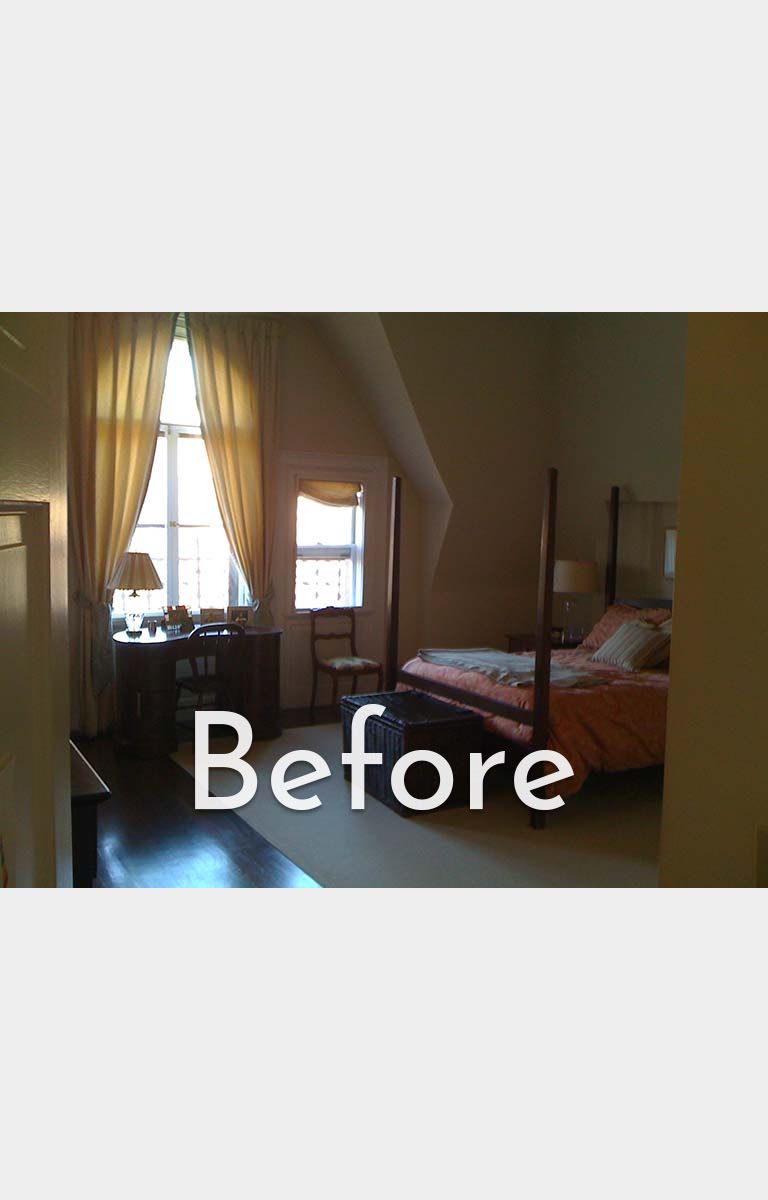 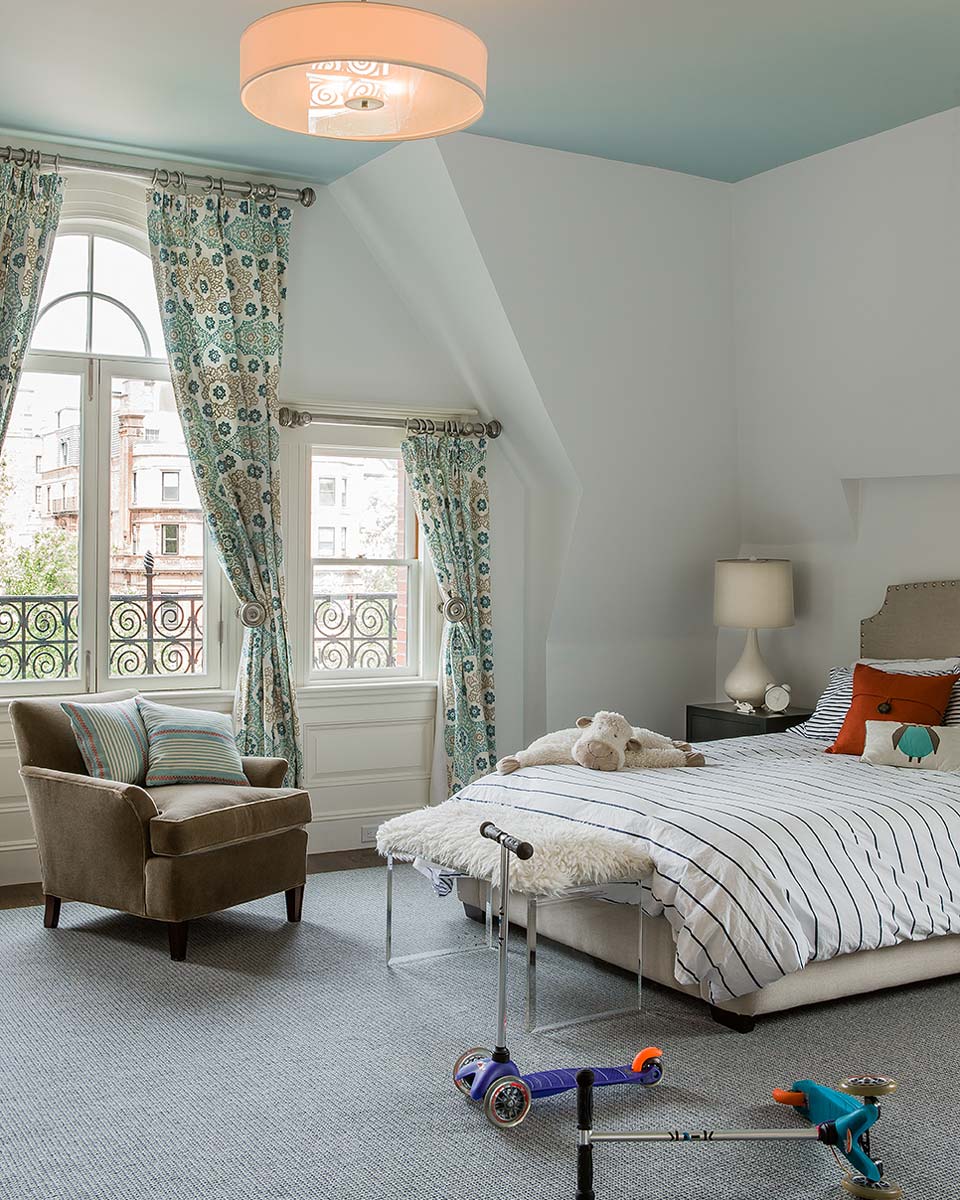 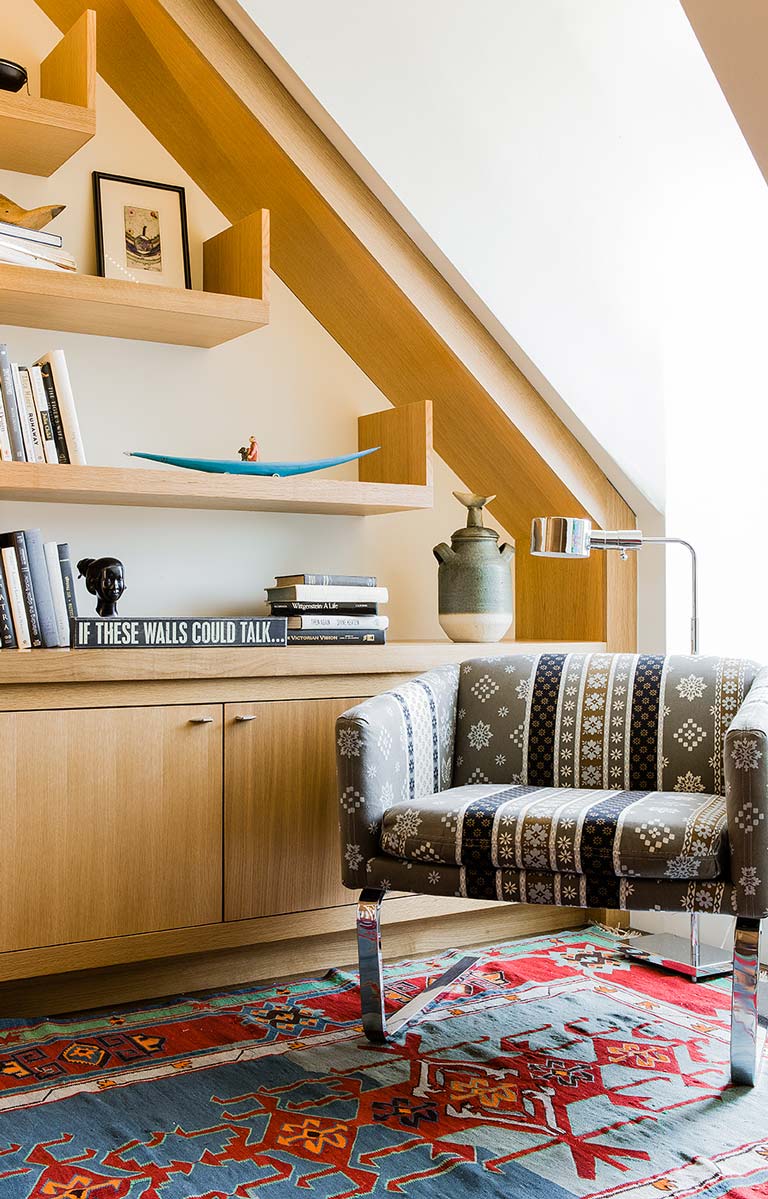 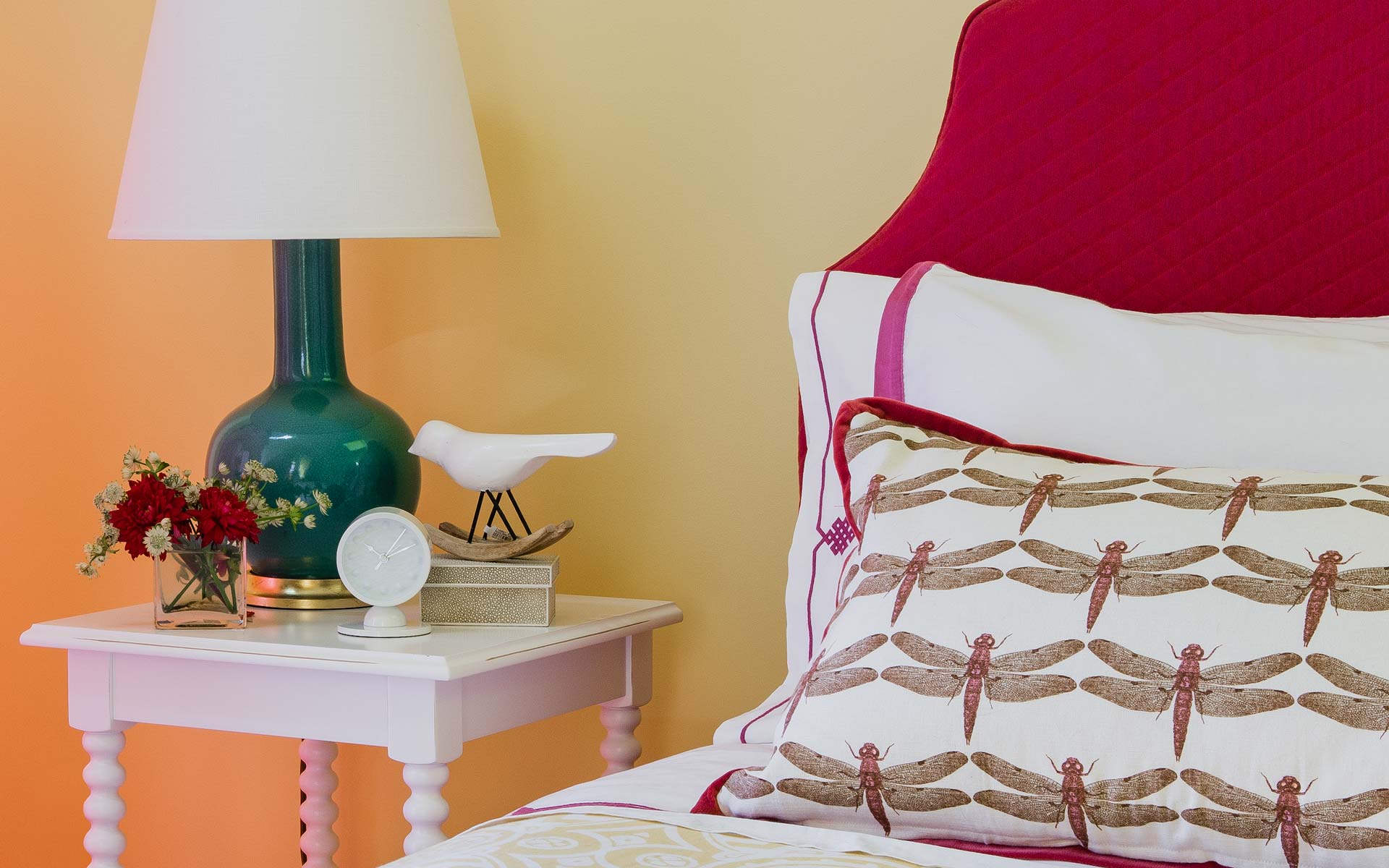 The couple who chose this prime Back Bay penthouse condo, understood that it would take a gut rehab to make it the kind of home that would meet their own needs as well as their two active children.

Despite its tired state, and cacophony of ceiling and wall angles, oddities from dividing the former single family home into three apartments, it featured city views from three sides, and a close proximity to the Charles River and the city parks. But the biggest bonus: it’s conveniently located right across the street from their children’s school.

Our goal was to bring an aesthetic unity to the space, while also creating clarity of function in the elongated main living space. We aimed to diminish the look of the odd ceiling angles and maintain the grand ceiling height, through the addition of well-crafted millwork, high end finishes, materials, and lighting.

Since the condo provided no lower level storage room, we also needed to provide lots of storage, hidden if necessary.

The condo formerly had a small bedroom across the kitchen which prohibited the open concept plan the clients envisioned with a Family Room adjacent to the kitchen. So we removed that bedroom, which still provided three good sized bedrooms for the young family of four. And we opened up the kitchen to a Family Room, Dining Room and Living Room. No room felt constrained allowing ample room for the elegant furnishings that were chosen.

Bedrooms with baths flank both ends of the lower condo level and another bedroom/bath resides on the upper level along with an additional Family Room space.

We found room to create his and hers closets in the Main Bedroom suite, and in the end provided so much storage space in closets, soffits, built-ins and hidden cabinets in the kitchen island, that some of it remained empty after the family moved in all their belongings.

The only really difficult space challenge was finding a spot for a Powder Room on the Main floor. The clients opted for combining the Powder Room with the Main

Bathroom. We used a pocket door separating the large space featuring a shower and double sink, and the smaller space with its own sink and toilet.

This bathroom became my own favorite room of the house, for we combined several textural elements and unique hidden lighting above the sink in the smaller section that washed the wall below, making it a most compelling little nook. Ming green grass cloth covers the walls in the small section. Black and white ceramic tile fill the area at the sink along with a mirror that’s bordered with the tile trim. The common elements of the two bathroom rooms is the marble tile floor, the same tile used on the shower walls. We also chose teak for the small room sink base as well as the vanity in the larger room. The double basin sink is make of concrete and tinted the same green as the marble tile.

We brought in a local woodworking shop to create wainscoting panels installed on the LR and DR walls, setting off the grand Palladian windows. We also wainscoted the Family Room exterior wall using the same panel profile, but rather than a painted finish, we chose walnut. The Family Room and kitchen cabinetry were also built of walnut, offering a lovely play of dark and light in the large open living space.

The most impactful feature of the kitchen is the hand-hammered nickel backsplash behind the range crafted by Richard Duca, a local metal sculptor.

Upstairs we created unique white oak cabinetry in the common area, which in

actuality is an extension of the daughter’s bedroom.

Just recently we renovated the roof deck outside that room for an outdoor space with stunning views of the surrounding urbanscape. (Not yet photographed as of this writing.)

We’ve also added a few new fabulous furnishings to the other rooms. So more to come…